After yesterday's post about the 4-cylinder Bolwell, a couple more photos of the same car have arrived. One was taken by Henry Stork and one by Peter Garvin, both of whom attended the 1989 Easter at Perth. By this time it was turbocharged and Peter thought it was owned by Ray Julian's brother. 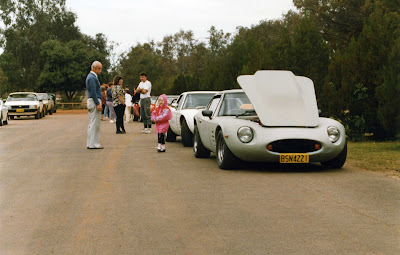 The pics of the primered Mk 7 take me back to the early 70's. Do many people turn up in "works in progress" any more? Or are we all genteel baby boomers who use the Benz till the Bollie is finished? Turbo Datto powered Mk 7 would be fantastic - light and powerful.

Any one got a drop of Chardonnay/ Or Merlot? Jeez I remember when rough Cab Sav and beer were the order of the day and many fine Bollie club wine bottlings. Wine in 20 litre containers. Aaah then we used to drive home (or was that race home). Very politically incorrect these days. What was that police comment on a club run? Oh yes he had "Seen better behaved bikie gangs". The fun of youth