Last night while I was contemplating the previous post about Le Mans, an email arrived from Tom Drewer containing his latest press release (hot off the press see link below)
http://docs.google.com/gview?a=v&pid=gmail&attid=0.1&thid=1221b457c887851b&mt=application%2Fpdf
Tom is going great guns and has just been testing with Panoz Team PTG which probably means a step up to ALMS GT2 from Lites 1 and Lites 2. Next step Le Mans itself.
The press release is headed by this cartoon by the world's greatest motorsport cartoonist which will be in this week's edition of Auto Action. 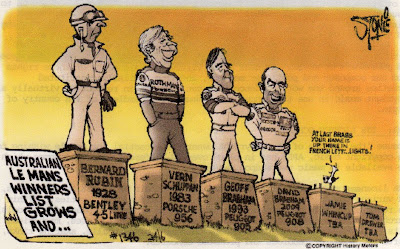 I just love Stonie's cartoons and the way he reads body language. Doesn't that just look so much like Vern Schuppan, with his hands in his pockets and that grin? Stonie co-ordinates the monthly "old farts" Friday lunches at The British and Vern turns up from time to time (so does Norm Beechey of late - he must be an honorary South Australian aging revhead).