At Goodwood this year as a tribute to Fangio, who would be 100 this year were he still alive, there were parade laps of most of the cars he had raced going back as far as this Chev coupe. 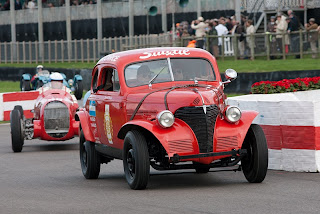 Our Chev coupes in 1939 were slopers. This one isn't. It looks like it's RHD. Was Argentina a RHD country in the old days? Back in the day, I've had 2 '39s, they were both 4-door sedans. Lots of torque for towing. They were identical except for one thing. Different front ends. One had the usual beam axle like the Fangio race car and the other had the notorious "knee action" independent jobs like you used to find on Vauxhalls of the 30s.
Posted by John L at 9:20 PM