The things you find when browsing Jalopy Journal. 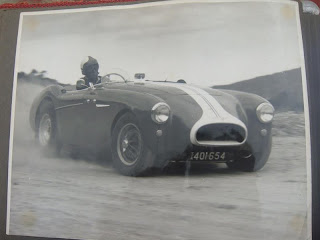 The car, originally owned and developed by two brothers, is a very early '53 BN1 Healey 100 raced around 1956-1963 with a number of engine set ups. First, it ran the standard Healey engine, then the Healey engine with a 3-71 supercharger that protruded up and out of the bonnet, and finally it ran an Olds 324 bored out to "about 365" with a six Stromberg 97 carb set up. The alloy nose was custom rebuilt in the late ‘50’s after a paddock “ding” to the original nose. In period the car held a number of local sprint and track records, and with its Rocket engine was written up in the Australian press as "....probably the fastest accelerating car in South Australia" and "the most powerful sports car yet seen in Australia...." (it's original owner told me it would lift it's front wheels a few feet in the air when under full acceleration).In the unyielding quest for speed and victory the brothers built a rail dragster and the Olds Rocket engine was transplanted out of the Healey. It then gained a 6-71 supercharger and 8 Stromberg 97’s, and the custom gearbox & rear end was also lifted out of the Healey and bolted into the dragster. Picture a VW front end, two chassis rails, the Rocket engine, ‘box and rear end, a chair and steering wheel.In full-anger whilst competing the engine in the dragster was lunched, as only a high speed miss-change from a mid gear to a low one will do.End of the Rocket engine, and the rail’s and Healey’s racing career. Fortunately for the Healey after the dragster’s demise the Healey was re-united with it’s rear end and gearbox and was parked and left. It’s been off the road since 1963, and was purchased recently from one of the original owners, complete with pretty much everything bar the 324 donk, but also including the dragster’s 6-71 & eight Stromberg ‘97’s all set up as it last ran.Now, the search for a 324 and a manifold for the six by 97’s begins.....CheersStew.Adelaide, Australia

the post about the V8 engined Healey from the 50's brought out memories as the guys that built it were contemporaries of my hot car loving uncle who used to talk about it all the time.

The brothers were Polish or similar -Gurzanski or whatever, the car was sort of an urban legend where I grew up.

Also talked of by my channelled 37 Ford Coupe driving cousin who was 12 years older than me and was hotrodding in the 50's and apparently this Healey used to GO as the guys had the smarts to work it out.

Sorta like Eddie Vodopevic's brother who was at the leading edge of engine modifications with the likes of Kev Flaherty and such.

the HAMB thread is a goody is it not.