Last week Jane and I slipped up to Renmark to have a look at Peter's 300ZX (which, incidentally, we've shaken hands on and we'll have to go back up and get it when the funds come through). 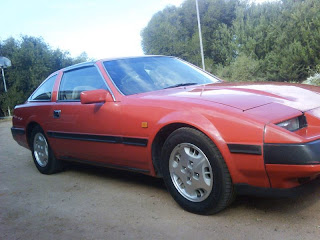 The Sturt Highway is in pretty good nick these days and we could charge across the floodplains almost unhindered by semis, only the occasional grey nomad getting in the way. The river is pretty full and the only other observation to be made is that compared to where we are, ALL of the vines seem to be machine pruned. They look like they are done by an award winning hairdresser. It may well be that there is a shortage of casual labour in the Riverland compared to what we have in the Barossa.

After a burst around the blocks in the car and a cuppa with Peter we cruised into town and had lunch at the Renmark Club followed by a stroll along the river bank where Frank's barge happened to be tied up. 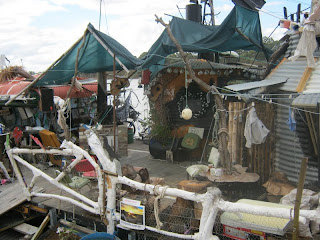 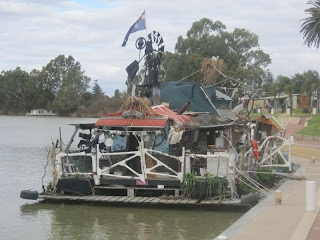 A bit further on was the PS Industry. 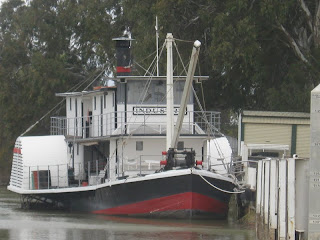 It still has its steam engine. I remember the Industry being derelict years ago and it's good to see it restored and providing rides up and down the river. Back in the day it wasn't a trading or cargo or passenger boat. It was owned by the State Government and used for dealing with snags in the river to enable the safe passage of all the other paddle boats.

We chose to go home the other way, going through Berri and Loxton and down that very fast road to Sedan. It was amazing to see the large number of ring necked parrots....... 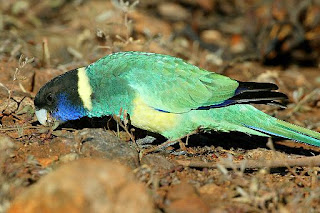 We recrossed the river on the punt at Swan Reach. 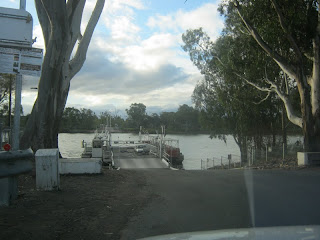 When we got to Kyneton we did a right turn, going home via Moculta and then Truro. On the track into Moculta we noticed a large family of white winged choughs. On the ground or sitting in a tree, the chough doesn't look any more spectacular than a crow really, but in the air you get to see the white feathers on the underside of their wings. 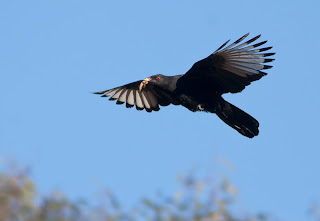 What is the story of 'Frank's barge"? Looks like Beverley Hillbillies on the Murray. I can see an exhaust pipe so is it powered and does he live on it??

The exhaust pipe might be for the brick oven/bbq. He invites people on board for a cup of coffee. There's an outboard on the back. I think he hails from Paringa, up the river a bit.