I just wanted to show you a rebuilt Mark 7 that has emerged after a huge rebuild. It belongs to Brian Deckert. Brian comes from a bit of a Mk.7 family. His dad, Colin, spent years building a very different Mk.7 and I'll show you some photos of that later. Unfortunately he died before it was completed and I think a few of its bits have shown up on Brian's car, including the personalised numberplates. Brian's brother, Grant, drove a Mk.7 coupe for years as his everyday car and that is the one that Peter Mac has restored so well, with a little bit of help from his friends. Grant has a Nagari sports body and a Simon Aram designed Develco chassis awaiting construction. I remember years ago Brian having this tiny little Renault 750 that reputedly did wheelstands. He still has it, but it is his Mk.7 that I want to talk about, along with a little bit of its history too, I guess. This is a photo of the car on a recent run to Birdwood. That's club member Ray Winter's Mitsubishi powered Condor in the background by the way. The photograph was taken by Brian's good friend, Adam Lee. Adam is a professional photographer, producing books of photographs. He has photographed in detail the rebuilding of this car and the intention is to publish it. I'm sure it will be a popular book. Anyway, you might notice the sliding door windows, reminiscent of the Mark 5 and early Minis. There is a good reason for that. Brian has fitted side intrusion bars and burstproof door locks and so far hasn't found a way for the windows to wind down past all that. When compared to other Mark 7s, the windscreen rake is noticeably different which is another reason the side window frames had to be modified to line up. The nose sits a bit lower too as you can see in this line-up. 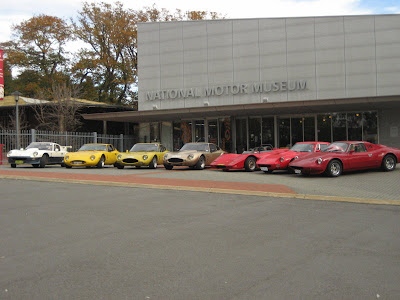 The picture below I threw in because I think it looks good. 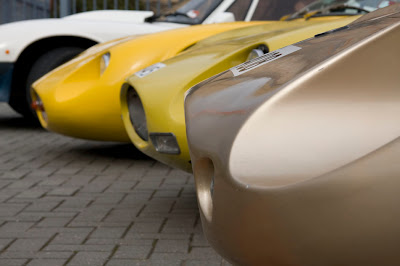 The first time I saw this car was at the Mildura Easter in 1975. Remember Johnny Szabo and his Mk.7 that took only 6 weeks to build? Well he did a second Mk.7 for his then wife Pat. It was painted in two shades of green, and here it is at Mildura that year. 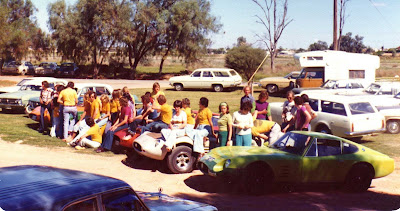 It's in the shadows I know, but it's the only photo I have. Anyway, you might like to click on it to enlarge it and see how many people you can recognise from 33 years ago. I didn't see the car again until 1981, I think it was, when we went down to Baskerville in Tasmania for the Production Sports Car race that year. A woman called Trish Ramsay was looking for me in the pits after seeing my name on the boot lid of a certain Nagari. Who the hell was Trish Ramsay? It turned out to be Pat Szabo, who had by then separated from John and moved back to Hobart and returned to her old name. And she still had the Bolwell. Not long after that she wanted to sell the car and she sent it over to me. It came on this funny little boat that used to ply between Hobart and Port Adelaide (up the West coast would you believe). I went down to the Port to watch it being craned precariously from the deck and I drove it home. Some time later it was bought by Susie Walters and soon after that it was painted red by some of the guys in the club (which possibly included Grant Deckert). That's Susie with the car in the photo below. 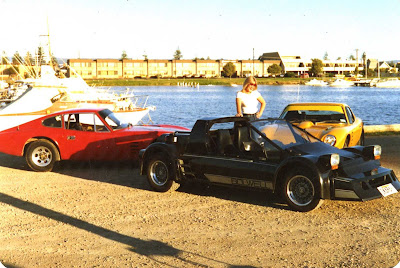 Susie is now married and is Sue Davis but she was Susie Walters when she was in the club. She drove it for a few years and then it was acquired by a surfer in Seaford who retired it soon after and it sat in the open, deteriorating for a number of years until it was acquired by Barry Downie-Leslie who put it away in his shed along with the other Mark 7 he had bought from Grant Deckert. Years later, when Barry reverted to a Nagari sports project, he blew the dust off the 2 Mark 7s and sold the pair of them. Peter Mac ended up with one and Brian Deckert the other and two fine rebuilds have occurred.
Posted by John L at 9:48 AM

I have been asked if there is a side on or a front 3/4 view to illustrate the profile better. I don't think I have one but will ask Brian or Adam if they do. I'm sure they will.