Then and Now No.1

Here are a couple of photographs of the same Mark 7 about thirty years apart. It is the old Grant Deckert car that is now owned by Peter Mac. Grant wasn't the original owner/builder. It was an early kit built by a guy called Geoff Wood who, in 1966 or 1967 was at Adelaide Uni and built up the car to get around in, quickly notching up hundreds of thousands of miles. It was painted a dark blue in those days. I recall it having the deepest gel-cracks I have ever seen. When it became for sale, Colin McAskill bought it and the next owner was Grant who drove it for years and years as a work in progress. I have mentioned in another post that Barry Downie-Leslie was the next custodian and finally, via John McLean, Peter Mac bought it and began the mammoth restoration which is well documented in the South Australian pages of the BCCA website. 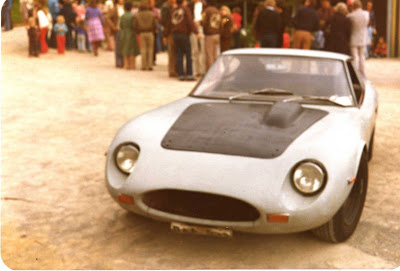 Here it is at our local brewery at Greenock, looking very smart. The International truck, by the way, is an old truck body dropped onto a Holden one-tonner chassis and mechanicals. 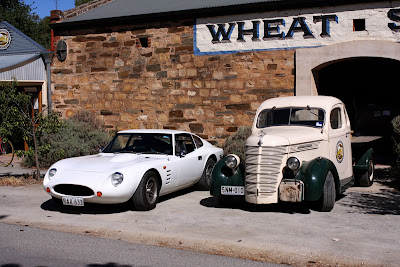 It looks superb and is certainly a credit to Peter.

Geoff Wood was also a presenter of early Adelaide TV and the build of the car was featured in a couple of Saturday morning sessions.

As an early Mk 7 had leaf springs and a ribbed floor and was built by Geoff without a speedo, he had a wrecked FE and simply did a drive train swap, steel wheels and hubcaps. Geoff drove the car until it was very tired and then sold it to a hairdresser in North Adelaide from where I bought it in July 1972. The gelcoat was stuffed perhaps due to the early attempt by Bolwell's to include the car's finished color in the gelcoat. Under the ratty dark blue enamel was red color gelcoat. Except for the windscreen all windows were plastic.