When some of us, all over the country, look up lists of entrants in historic events, like the Leyburn Sprints, we spot vehicles that jog our memories. Being a South Australian, I couldn't help but notice a 5-litre MGTC for example. The same goes for Rob, in Sydney, who, after seeing a couple of Bolwells on the Leyburn list, was inspired to write the following:-

"As a matter of interest they mention the Centaur Waggott.
If I remember correctly this was one of, if not the,  fastest sports cars in Australia in the early 1960s.
I recall it was owned by a Brisbane car dealer, Dennis Geary.
In a meeting at Lowood, Qld, I think he thrashed the latest Lotuses.
One of them was driven by a wealthy racer called Len Deaton or Deeton who had only one eye. He was involved in a pretty serious accident that later led to one-eyed drivers being banned.
I was lucky enough to track test this car at Lowood - it was a pretty alarming experience for an 18-Y-O cadet journalist on the Courier Mail (I was Qld correspondent for Wheels and SportsCarWorld at the time).
It would be interesting to know the history of this car since - it was then way ahead of its time, and it was a good-looking, well-prepared sportscoupe that was a credit to Aussie racecar building."
It certainly was the fastest GT in the country and won the Australian GT Championship, in 1962 I think, in the hands of John French, before it was sold to Dennis. The car came about through Wal Anderson and John French getting together to build it. Wal had  this incredible Waggott Holden engine and a few other bits and pieces and John had a very impressive driving talent. Using Centaur designer/builder/racer Tim Harlock's drawings and Dave Evans' talents as a chassis builder, the GT evolved. 1962 was a big year for hardtop sports cars or Appendix K as they were called and the Centaur GT went about the business of winning races and the championship against pretty formidable opposition. At the end of that year, CAMS, in their wisdom, killed off the category as quickly as they had begun it and the very reason for the Centaur's creation was gone. The Waggott engine was sold off to someone in speedway and the rest of the car was sold to Dennis. Dennis also bought the Glynn Scott Special which had a Repco Hi-power engine which he removed to install in the Centaur. As you have noted, Rob, the car provided you with "an alarming experience", despite the fact that it was without the amazing Waggott power plant. The car is now part of the collection of Bevan Batham, in Warwick, as is the Elfin Mallala Dennis used to race along with some other Centaurs, and is re-united with the Waggott. Dennis has retained his Lotus and here he is leading the parade at Speed on Tweed this year in it. 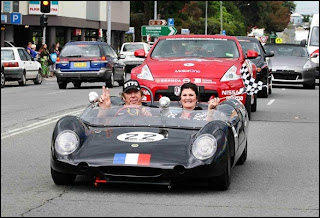 Centaurs are revered by Queenslanders in much the same way as the links South Australians have to Elfin, even though they only made 11 of them (12 if you count the Mono which was never completed but still exists) and they were mainly built under various Queenslanders' houses. There were, however, a number of copies made. The banana bender who went to California to pirate the Nagari also called his car a Centaur.
Here's John French in the Centaur GT at Lakeside. 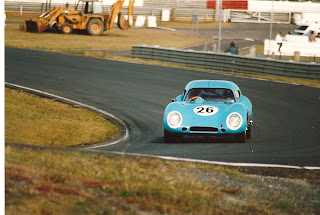 and here's another couple of shots...... 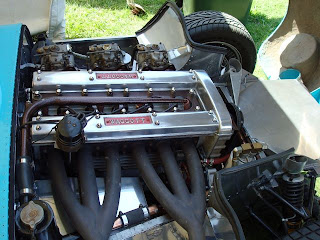 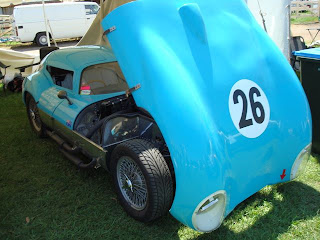 John,
You are spot on about Queenslanders and Centaurs.
For detailed information on Centaurs, the MGCCQ.org.au website in the 'News' section has an advertisement for John Campbells book "Centaur" about all of the Centaurs.

By the way, at a function on the Thursday night before Speed on Tweed, Denis was in top form regaling the mob with stories about the period of his ownership of the Centaur. Denis even out-talked John French !!!
Cheers
John Davies

Beven Young lists the Centaur book too. And don't forget I still have your autographed copy.
Out-talking John French would be no mean feat. He's going to be driving his old Falcon in the Legends race at the Gold Coast next week.

"The banana bender who went to California to pirate the Nagari also called his car a Centaur."

Never knew this - any foters ?

It was a coupe. The body was split down the centre and widened about 6" to accommodate an RX7 windscreen. He died over there and the family brought the car home. It now resides in Sydney. He did manage to produce some clubman cars while in the US. I have placed pictures of it on the blog before, probably under the heading of "wide bodied Nagari" or something similar. I will, however, try and dig out some more photos.

Thank you very much for the informative article about Car Wreckers Brisbane. Now Consumer know how to pay cash for cars and to to get car in affordable price. We have some informative blogs as well related to Cash For Cars, and Cash For Car Brisbane