As you know I love grey Holden motors so I had to show you this.

This is the Nalla Holden on a shakedown run at Calder in 1965 and yes, that's a grey motor. I don't know if it's dry sumped but I suppose it is. Actually that black strip under the nose is an attempt to photoshop out the tow rope as this was just after the blower blow off valve blew off.

This is the same car today in the hands of its current owner Henry Walker at Wakefield Park.

I'm sure he's much safer in it than the old days. Probably no big holes in the firewall even. 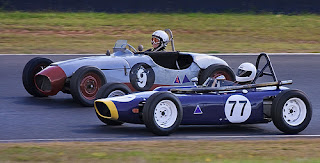 This is Henry diving under another grey powered (albeit more upright) car, the 1952 Anderson Holden. I'd have either.
Posted by John L at 9:58 PM

John, Yes It Is the Nalla Holden [Allan spelt backwards] as in Nedloh.No it was not dry sumped, just an insert to the sump to the vertical as the engine laid over at 40* to allow for offset transmission and low driving position.It was, less safe to drive then , no fire proof driving suits or seat belts It was a great car to drive, heaps of torque and high terminal speed. 10 PSI of boast at 7000 Revs in top. Timed at Mallala old circuit at 150 MPH. Alla Lowe.