http://www.youtube.com/watch?v=JYAfRaJKy0c&feature=player_embedded
You've got to watch this. Col W. reckons it's what you get when you've got too much money and too much sand. It kinda reminds me of the sand drags at Ponde which were mainly for stinking hot motorbikes, mostly Harleys with V8s, but with a hillclimb thrown in for good measure.
My friend, Bilal, in Lebanon, has this nice new Nissan for desert rallies. 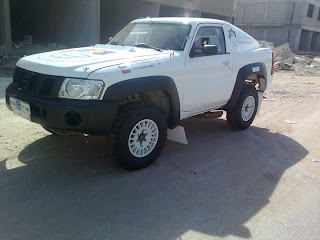 Trouble is he hasn't used it yet. Things are a bit dicey down south in the desert regions.
Posted by John L at 4:04 PM

Great blog about the Bond Equipe but he was brave buying his wife a HB Torana. Terrible reputation even when new and the Brabham in the same vein as the Brock Lada Niva or whatever. Old school chum ordered a MK 2 Torana HB SL with the Series 70 motor in 1968 and it blew up on him as he drove home from the dealership and so commenced 18 months of legal grief only sorted when they accepted his order for a 1969 GTR Torana and credited the full value of the HB shit box against it. Those early 4 cylinder Torana and Vauxhall Vivas were terrible cars even when assessed in the light of the poor performance of the cars of the day and were $ 500 bombs within a couple of years of being new. Comparo to the Mini Deluxe and VW's that literally filled our small car roads back then until the new Datsun 1600, Honda Civic and Toyota Corollas took that market by storm.