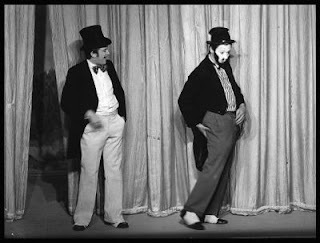 along with Stiffy (played by Dave Flannagan) but probably better known as Channel 10's Rock Wallaby, has a project that he is launching himself into with determination. The project is to locate a sports car special built by his cousin John A Mariner. 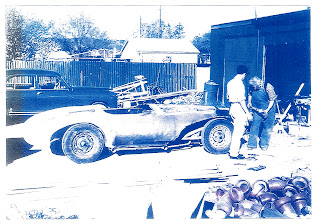 History : Built for street use approximately 1961-1963. It was later sold to Light Motors, Adelaide. It was believed to have then been sold to speedway driver and "wheeler dealer", the late Laurie Jamieson.
The rego number is unknown at this stage but was a 6 figure number beginning with 55....
It was reputedly repainted from red to dark green.
Description : Chassis was apparently copied from plans of a particular model Ferrari roadster of the fifties. The body was hand made in metal beaten from a collection of 1940s Ford sedan panels.
1948 Ford Mercury side valve motor. The car had Lakes pipes.
Aim : To trace the history, hopefully locate, and write an article.

The "Forgotten Fiberglass" (I really do know how to spell fibreglass) site (see links) has been featuring the Bangert Manta Ray a fair bit in recent times and that car is certain to have made the odd appearance in Popular Mechanics in the late 50s. Even though John M constructed the body in steel, it looks very much like the Bangert inspired him. 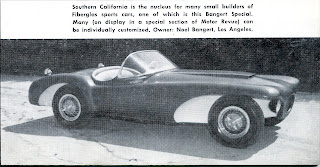 Not only does the car have the DB3S/Buchanan front wheel arch cutaways, they are also in the rear guards as well.
If anyone has any recollections about this unique sports car, please let us know. There may even be the odd photograph out there somewhere.

Back in the "poor student" days it was common for the young guys around our way to drop Corolla motors into their ageing Morris Minors and Michael was no exception. The only difference is that forty years later Michael's Toyota powered Morris is still his daily driver. It's been all over the place, Darwin included, and has had more colour changes than you can imagine.
Posted by John L at 9:03 PM