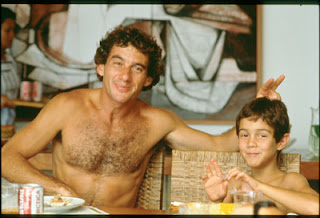 I find that Bruno with the yellow helmet on looks a lot like his uncle; despite that, i think he'll never be able to achieve what Ayrton did. That's simply because Ayrton was a really great driver, and nowadays F1 racing ain't about driving skills.
Ayrton will remain a legend!

I agree that Ayrton will always remain a legend, but only because of his tragic death.
Formula 1 is constantly evolving nowadays, with major changes every year, and the records are getting challenged and beaten. So I think that Ayrton, as an excellent driver that he was, is over valued because the way his career ended.

"only because of his tragic death"...
If you had actually followed Ayrton's career while it was happened you will understand his god like abilities behind the wheel!
If ayrton did not die, schumacher would not hold as many f1 records.
Bruno will add drama to and be the underdog to cheer for in f1. He is not driving for money but for his passion for the sport.

The likes of Vettel, Hamilton, Webber and even Alonso are just so boring to watch.

i agree with this anonymous person, If you're just a new F1 follower and has a very lay man's understanding of the game, you would feel exactly like lepper. Ayrton during his time, not ONLY has the great skills but the Heart to match for it. The races today with so many safety restrictions is just so safe and mediocre compared to the ayrton-alain times.