A midweek sojourn across to Kapunda for morning tea by the Barossa crowd did not go un-noticed.
One vehicle that caught my eye was this T model buckboard. 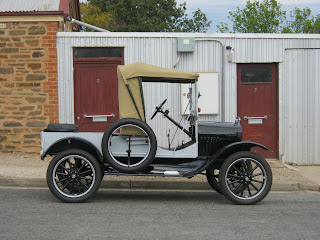 It's not a cut down tourer but was built by Duncan & Fraser (yet another Adelaide body builder) as a buckboard in 1922. This vehicle has been in the Barossa AND in the same family for all of these 90 years. 90 years ago Fords came to Australia from North America as rolling chassis and were fitted with locally made bodies when they got here. You could say that all of the black bits were made in Canada and the grey bits in Adelaide.
Another buckboard that made the journey was this Oldsmobile. 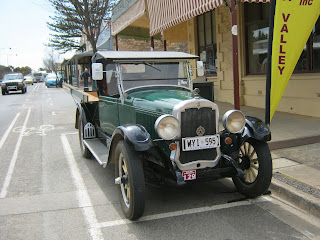 Now this one more than likely was converted from a tourer. This was the typical buckboard style of the era with a bench on each side of the cargo bed. This was ideal for ladders, pipes, posts etc., in fact it would be just the thing for Andrew's 15 ft. windsurfer poles. If you had extra passengers they could sit in rows down each side, a bit like a Troopy.
When I was a kid my dad had a green and black Model A Ford with an identical buckboard body to this. Because it was used for a milk round it had a canvas covered canopy over the back. (This was before he saw the light and upgraded to a horse and cart). One morning after finishing the round and washing the serving cans, we were going home along Fullarton Road when this bloke in a Rover 75 came past and immediately cut across the bow of the Model A, a dangerous move cutting off a car with cable brakes. Anyway, this guy must have been the original roadrager and obviously had the Edgar Brits about something because he slowed down and let us go past and then came up to do the same thing again. Just as he came across, dad flicked the wheel and hooked that spring steel front bumper into his wheel arch behind the rear wheel and then backed off. This pulled the rear guard clean off. We just went home and never saw the guy again.
Years later I had a Model A myself. It was bright orange and was a mud plugger. The guards were cut back and running boards removed and it had excellent ground clearance on its 19" wheels. It too was a buckboard with tailgate and the rollover hoops were topped with a tin roof. It had an OHV conversion, a Holden carby and extractors and heaps of hp. I can understand why they used those motors in speedcars for so long. One day we towed it on an a-bar out to a VSCC gymkhana in a paddock out near the White Horse Inn. It went very well against the E-type 30/98 and the odd Alvis, until the motor seized. We left it in the paddock until the following weekend. When we returned it was gone so someone must have taken a liking to it.
I think I've digressed again. Anyway, you'd think this must have been a ute run to Kapunda judging by the photos here. There was, in fact, a lovely light green FJ ute and a couple of WWII Jeeps, a Willys and a Ford (I don't think I've seen a Bantam one) but the commercial vehicles were definitely in the minority.