No-one seems to recognise the car of Peter Blight that he has restored so nicely. Peter, who lives in Williamstown (SA), would love to hear from anyone who can throw a bit of light on its history. Here's a few shots of it at Collingrove. 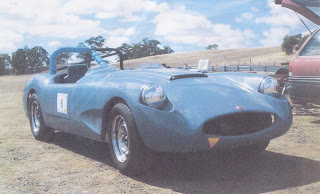 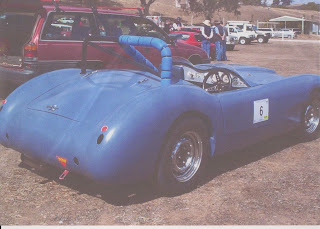 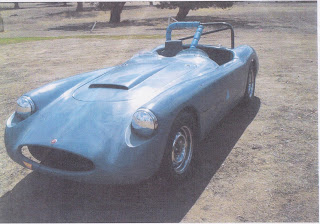 This is what it was like when Peter bought it in Elizabeth. 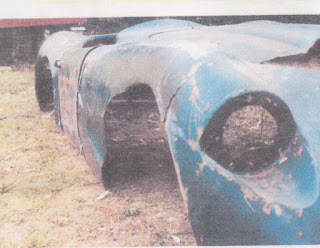 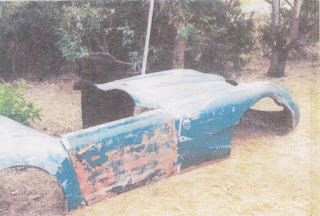 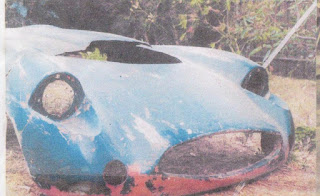 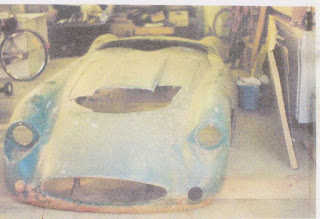 The body was in 6 pieces, front section, rear section, 2 doors (double skinned and with FJ door handles), boot lid and bonnet, plus a crude roof to fit FJ windscreens. The only other part was the remains of an angle iron frame. At the time of purchase Peter was told it was a Buchanan. At that stage he had not seen one of those so he had no idea what a Buchanan actually looked like. He was also told it might be a Bolwell. Anyway, he's seen the real things and now doesn't believe it is either, which is a fair assumption. This car looks even less like a Buchanan than the Triden, built by Ron Tonkin, which took many of its styling cues from the Buchanan, amongst other things. Ron, of course, built two other sports cars that many have mistaken for Buchanans. Despite the similarities, Immanuel, who has one of them (Larry had the other one), has taken measurements and nothing conforms whatsoever. A long shot maybe, but did Ron, who was adept at creating shapes and mould making (and, in fact, was the fibreglasser at Elfin), make this car too? What do you think, Wayne Tonkin?
There was also another car that was built by Albert Ludgate that was not one of the Capricornias that we know. Albert and Ron were known to each other. I have distinct memories of that car as a teenager and it most certainly had that Austin Healey hip line as did many other Australian specials (including, of course, the Winston Bolwell car). Believe it or not, Steve Rowley has seen this body and he can't throw any light on it. I wonder if Clive Hill can.
Peter is guessing, and I would too, that it was built about 1960, possibly by someone local. Immanuel, who is also in Williamstown, and Peter will have to put their heads together. Peter has sent photos to "Restored Cars" but nobody there knows anything.
While we're at it, has anyone found any more information on the car that Michael Scheid's cousin built?

Wayne says there is nothing in his dad's comprehensive records and photo albums that relate to this car. Back to the drawing board.