We all know the innovative Chamberlain brothers who produced that FWD Chamberlain racing car and of course, the rugged Chamberlain tractors. 'Bob' Chamberlain (Alan Hawker Chamberlain) developed a mid engined passenger car in 1938. 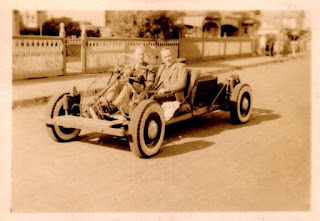 Being too busy with many other inventions, Bob handed the car over to his cousin, 'Jim' Hawker and the Hawker V8 was born. 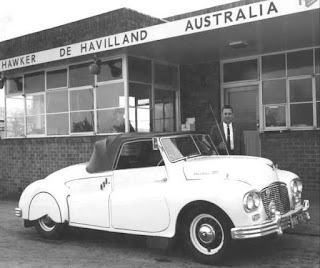 Jim was the regular driver of the Chamberlain racing car. He was actually Harry Hawker but was called Jim so he wouldn't be confused with his uncle Harry, the designer of the Sopwith Camel aeroplane and the founder of Hawker Aviation. Jim Passed the project on to another cousin, Alan Hawker, who is pictured above with the car. That particular car spent many years in the York Motor Museum until the big sell off and it is now owned, I believe, by John Hazelden, the author of the now out of print book on Bob Chamberlain.
Posted by John L at 4:31 PM

I am the current owner of this very special vehicle. After it was at the York Motor Museum it was relocated to a private museum in the Swan Valley Perth. I brought it off Peter Briggs who owned it for approximately 30 years before I did.
The car is now located back home where it was first registered in Gippsland Victoria.