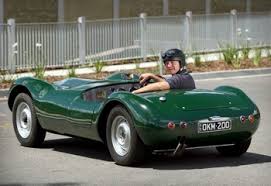 THIS is a rare piece of Australian motoring history.
Mechanic Jon Hansford, 49, has built this 1957 KM200 kit car from the shell to ensure that the country's motoring heritage doesn't "rot away in some shed or back yard".
KM stands for Keith Morrison, who made these kit cars in the mid to late 1950s in a Sydney garage.
Only 27 were made and only about 10 still exist. Hansford's is the only road-registered model in Australia.
"I believe this car to be an important part of Australia's history in the manufacture of cars," Hansford says.
"I found out during investigation about this car that the chassis and body were both made by Keith Morrison. All bodies were made by him, but some chassis were made by Nota and a lot were home-made by the people who bought the bodies. That makes this combination very rare."
The KM200 kit cost £266 in the 1950s. Hansford bought it in 2007 for $1000 as a bare body and chassis.
"That is how it was for its entire life," he said.
"It never had a dashboard, engine or even holes drilled for headlights.
"I've spent about $7000 and about 15 months part-time on it, so I would never sell it."
Hansford has done all the building work including fabricating many of the parts such as the suspension, seats and floor.
"The idea of a kit car back then was a cheap way to have a motor car," he says. "You had to use parts that you had lying around, so I've stuck to the same spirit and used what I had. "The Datsun engine and rear axle were in my workshop.
"Even the British racing green paint was given to me by a friend who paints trucks and had it left over. Although if I had to buy the paint, I would have bought British racing green, anyway."
The KM200, which looks like a D-Type Jaguar and is inspired by a British "Falcon" kit car, consists of a fibreglass body and a steel box chassis.
Hansford's model is powered by a 1970s A12 Datsun 1200cc engine and four-speed gearbox from a 120Y, a Morris Minor torsion bar front suspension and a Sprite MK1 steering rack.
The Austin A40 Farina rear housing is modified to accept trailing arms and a 4.22 Sprite differential centre.
The rear shocks are coil overs and there are no sway bars on the suspension. The steel wheels are 14 inch by four inch, the brakes are nine inch Morris elite front drums and eight inch elite rears, while the master cylinder is a Datsun tandem with no booster.
According to Hansford, it stops and goes "OK".
"I've no idea what the top speed is, but it will sit comfortably on 90km/h. Anything over that gets a bit scary," he says.
The idea of building the KM200 came over a beer after Hansford had completed his third restoration of an old "Wallace and Gromit" Austin A30.
"I was having a beer with a mate and I was wondering what I would do next, and he had this (the KM200) in his back yard and he said 'what about that?' "
The idea turned into a nightmare, with the fibreglass body full of "cancer".
Hansford has registered the finished product for club use only.
"I'm a member of the Paramount Small Bore Rifle Club which also has a car club," he says. "I take it to shows and we do rides once or twice a year.
"It's quite impractical as a daily driver with no roof and windscreen. You have to wear a helmet and goggles like on a motorcycle.
"It weighs only 540kg so it shakes around a fair bit and you have no crash protection.
"You also have to be careful not to downshift too quick as it locks the back wheels as there is no weight in the back.
"But apart from that it drives a treat.
"It's pretty noisy but a lot of fun." 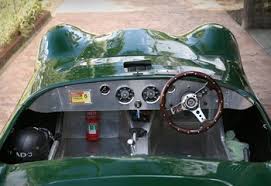