The Eddington Sprints were on last weekend. This is a quarter mile sprint on a public road. I don't know how long they have been having them but I recall going to one in the mid 80s (I think) with my VSCC mates. From the YouTube videos it hasn't changed much and I did notice 2 or 3 of the "Thirsty" Vauxhalls in attendance. Anyway, a couple of the local (Bendigo) Mark 4s were competing. This blue one is the one owned by Allan Thomas, now sporting a new silver stripe. It was Geoff Storr's car and ran in the Targa Tasmania in about 2000. It was entered as a Bolwell Geviva, remember that? It turned out that it was built by Geviva Engineering in Tassie. It is fitted with an Alfa 2 litre and has a transaxle, which makes it much heavier than John Goulden's similar car which is in the bottom picture in this post. 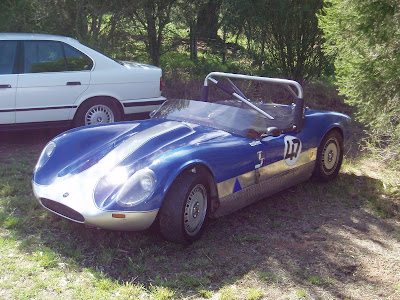 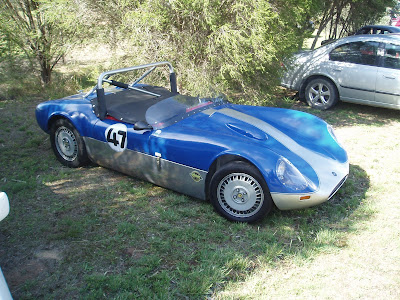 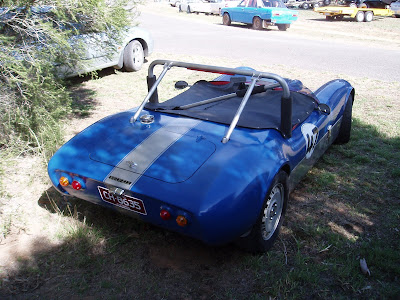 Peter Garvin was telling us recently about Allan driving the 4 in the late afternoon along one of the local Bendigo country lanes and was suddenly joined by a kangaroo in the passenger seat. Both Allan and the kangaroo scrambled to exit the car as it was slowing down. Pete thinks the roo may have scratched the upholstery as it was getting out. 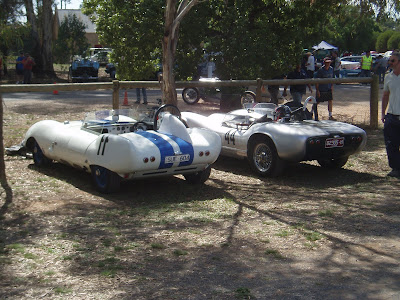 Above is Allan's other car, a Corolla powered Lotus 11 replica alongside John Goulden's 4. Allan recently sold his white ex-Colin McAllister Mark 7 to a new owner in Sydney.
Posted by John L at 10:50 PM