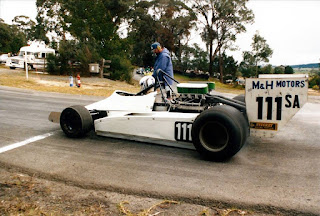 This is Roger Harrison in his Repco Brabham Tiga. A cute little formula car with a bloody great Repco in it. You can imagine how quick it was. Well, it won an Australian Hillclimb Championship. Tiga Race Cars Ltd was a British auto racing constructor and team. The company was founded in 1974 by two former Formula 1 drivers, Australian Tim Schencken and New Zealander Howden Ganley. The company's name was formed by the first two letters of Tim and Ganley. Tiga constructed racing cars for various forms of open wheel racing and sports car racing, ranging from Formula Ford to the World Sportscar Championship. Nearly 400 chassis were sold by Tiga before the company folded in 1989. Alan Hamilton now has this car and has almost finished restoring it. This is not the Tiga that Alfredo Costanza raced, that was an FA81. We have a Tiga in our club, Ken's rotary powered sports car. It will be good to see that out and about again.