Some time back we featured a collection of photos of the early days of the Mark 5 built by Peter Bartolo. Peter bought his body and chassis in 1966 and first registered it on 6th June 1967. It was bought  some time later by Dennis Trembath who paid the grand sum of $1000 for it. The next owner was Martin Ward and then thirty-odd years ago Daryl Siggs bought it. It needed restoring and Daryl put it away in the shed in the hope that his son would be keen enough to work on it when he got a bit older. This didn't eventuate and eventually he flogged it to someone in Broken Hill and it was never heard of again.

Fast forward to 2012 and there is a traditional Bolwell Easter in BH. Baz and Stacey who seem to have a nose for these things, sniffed out a Bolwell Mark 5 SPEEDWAY car up there. 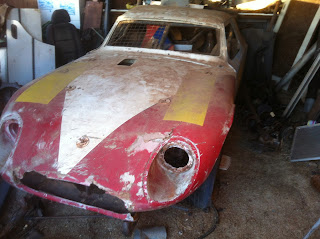 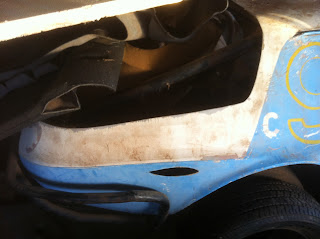 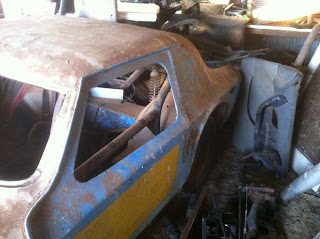 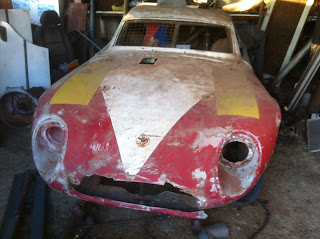 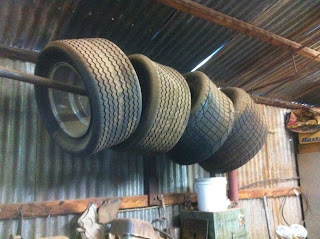 I wonder if there is a local who used to go to the speedway up there who remembers seeing the car and if there are any photos kicking around of it in action.

Just as many years ago as this Mark 5 left Adelaide for BH, another nice Mark 5 went to Junee in NSW and was also never heard of again in SA. I wonder if that could be unearthed too. Baz and Stacey, when are you holidaying in that area?
Posted by John L at 10:41 PM

Unfortunately, I'm assuming there's very little Bolwell left underneath that body? If I could swing another job locally, I'd be more than tempted!

didn't we agree that the Junee car was the one sitting on top of a container in Canberra or?

there is only the shell= the doors are glassed in and no glass/perspex. would be better leaving as vintage speedway car- unless you have heaps of time and talent,,,,