AAA August 29, 1975. Clearihan, Warren and Webb battle out the NSW Production Sports Car title in their V8 Bolwells. Jim Davidson's Elan won with Warren second clear of Clearihan. All four cars had similar fastest lap times but Davidson was able to clear out after outbraking Clearihan, leaving the 3 Bolwells to hold each other up in their private battle. Webb eventually retired with damaged steering after a bump from Clearihan.

Winton, Victoria about the same time. Chris Clearihan holds off Ron McPherson's 6-cylinder Bolwell with his V8 Nagari version. A little behind is Rex Colliver in Chris Roberts' Elan. 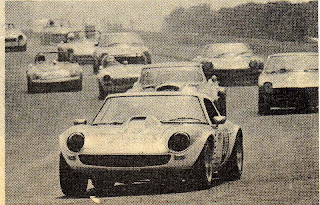 John Latham leads a mighty pack of Prodsports in the Bolwell. Occhipinti, Connor, Warren and Roberts are among those following. 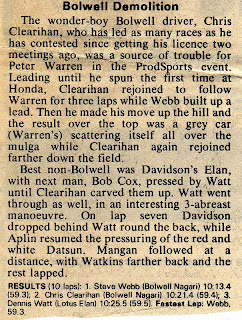 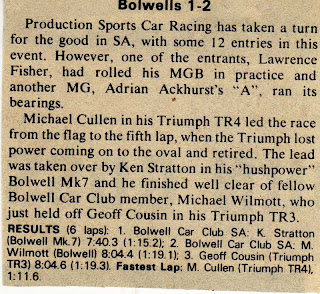