This is the car in 1955 and the photograph was taken at Port Wakefield. It was then called the Eclipse Zephyr. Eclipse came from the Adelaide Ford dealer, Eclipse Motors. Eldred had an engineering workshop and was a motor dealer from 1938. The previous name for the car was a bit of a mouthfull - the Norholfordor - because it was built from Holden, Ford and Tempo Matador parts. Before you ask, a Tempo Matador was a VW powered truck. 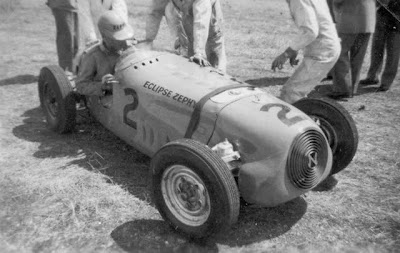 This second photo is of Keith Rilstone competing at Caversham in WA in 1961. 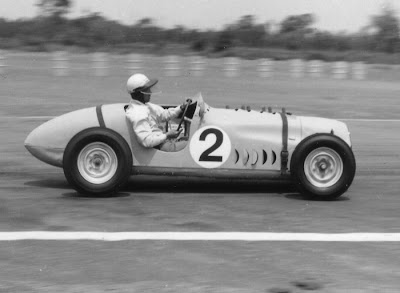 Finally here is the car in its present form, a famous Australian special. 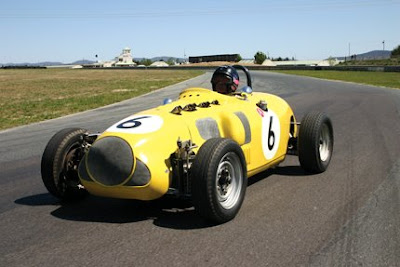 A little about Eldred De Bracton Norman. Rejected for military service in WW2 because of asthma, he began to make garden tools and to manufacture charcoal-burning gas producers to power vehicles. In 1946 he started buying ex-army vehicles left behind by the Americans, selling them in Adelaide. While in New Guinea gathering up these vehicles, he started building the 'Double Bunger' racing car, powered by 2 Ford V8 engines. Between 1948 and 1951 he drove the car successfully in hillclimbs and races in 3 states. While leading in the 1951 Australian Grand Prix, the car broke down. He then bought a 1936 Maserati type 6CM, for which he made a new engine. Stories abound of how he outpaced police as he tested cars on the road from his workshop to his Hope Valley home. In 1954 he drove a Triumph sports car to Queensland towing a trailer of racing fuel. Winning a support race on the morning of the Australian Grand Prix in the Triumph gained him an entry into the AGP itself, in which he came fourth. During construction of the SCC's hillclimb at Collingrove, he used a sub-machine-gun to blast holes for explosive charges. For the 1955 AGP he assembled a new car in 10 weeks. The Zephyr Special used propriatary parts and used the engine as a stressed chassis-member. In 1956 he abandoned racing to concentrate on inventing. Among his prototypes was a car towbar and a photographic device to capture burglars. He is most famous for designing and manufacturing a supercharger which dramatically improved the performance of Holden engines. Driving an old utility, he took potential customers on public roads and gave them terrifying demonstrations of its power. In 1969 he published his book 'Supercharge!' He died in 1971 in Noosa. His wife was Nancy Cato, the journalist, art critic, poet and novelist. Her most famous book was "All The Rivers Run" which was adapted to a television mini-series starring Sigrid Thornton. Much of this information was gleaned from an obituary written by the late John Blanden.

If you think Norholfordor is a funny name, how about the fact that the Mercedes Benz was going to be called the Jellinek after the bloke who was putting the money up. Some marketing people suggested that Jellinek didn't sound right. Also, in South Africa there was a Formula 1 car called the Clitrun. The name was derived from the driver, CLIve TRUNdell.

A couple of unfortunate names, indeed. I'm tempted to comment but wont!
The Nissan Cedric always brings a smile to my face. And lets not forget the still current Mitsubishi 4WD effort!

To the post, though, I had a treasured copy of "Supercharge" for many years. It sparked a lifelong interest in supercharging that has remained, sadly, unconsumated. Still time though!
I read a few years ago that Bill Norman was manufacturing the vane type superchargers again.

I thought you had to be a Mexican to know the true meaning of the Mitsubishi 4WD model.

The VW flat 4 in the Tempo Matador was in the front, driving the front wheels.

My stepson has a Mexican girlfriend!

And for a really neat (I think so anyway) front instalation of a veedub motor there's this Blackjack Zero three wheeler-
http://www.blackjackzero.com/mainindex.htm

Peter Marr wrote:-
A bit more useless trivia about the Tempo Matador. They were FWD and had a swing axle IRS with a pair of coils each side.
Years ago my uncle had one which I can just barely remember. It eventually fell apart (rust?) and the remains ended up in the backyard of where my uncle worked at the time. Eventually (about 1972/73 I think) my father got the back half of the chassis which I seem to remember as being two large dia. tubes (maybe 100mm dia. approx.) close together with the IRS attached. Dad removed the IRS from the tubes and built a box trailer which he attached the IRS to. He attached the centre pivot for the IRS with two height positions which enable the load capacity to be increased if required. I still have the trailer and use it regularly. Tows great.
Have a nice xmas and holiday in the deep north.
regards
Peter Marr