B8/102 was bought in 1973 by Ross Graham as an incomplete roller and built by him using a 289 Windsor with auto. By 1983 the paintwork had failed and the body was sanded back to bare fibreglass. You can see the remains of the light blue original colour here.

The car remained in that state from 1983 until late last year when Ross saw the need to downsize and move into a smaller place and a new home had to be found for the Nagari. Ross's son Kevin has taken over the project and last October the car was stripped down ready to go to the paint shop. It's now back at Kevin's and as you can see from Ken Williams' photo it is sporting a very nice shade of blue. 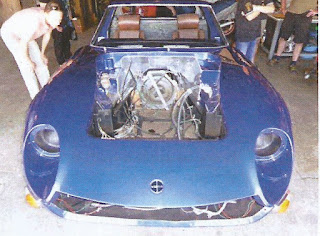 Both father and son are working together to complete the project. There's something about fathers and sons working together on projects such as this I reckon and the ability to have a joint effort is often the catalyst to get started.
Posted by John L at 9:14 PM