Way back in 1996 we bought B7 327K from Qld. It had had the roof cut of but the conversion had never been finished. 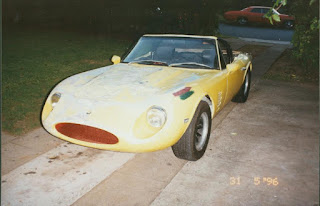 At some point this car had been really nicely done with lots of nice, well thought out, touches inside.When I got it it had a strong 202 with an Aussie 4 speed in it. I didn't see anything that made me think that it might have been raced at some point.However, the interesting thing about it is, the underside of the bonnet showed where at some point it had had a hole in the drivers side that had been repaired. It looked like the bonnet had not had a hole or bulge on the passenger side until much later.Later on it had had a bulge fitted to the passenger side. 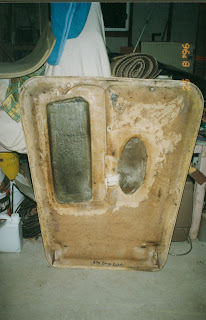 I ended up selling the car without really doing anything to it, to a young bloke at Muswellbrook. He ordered a new roof for it from Don but eventually sold it to Mick Day at Narrandera who had the roof fitted to it and got it repainted. Mick eventually sold it to his cousin, John Edwards, in Sydney (John was a member of the Bolwell club in Sydney for a few years before this, but eventually ended up with a couple of old Lambo's). John eventually sold the car to another bloke in Sydney who has done a fair bit of work to it. At the moment his name escapes me. Graeme Nicholls would probably able to tell you his name.When Easter was on in Port Augusta in 2004 (?), on our return trip, the top eye broke of one of the rear coil overs on my yellow Mk7 just before Narrandera. Luckily for me I had fitted decent bump stops so the tyre didn't hit the guard. Mick Day lent me one of the coil overs off this car to enable me to get mine home. It wasn't the correct height but I was able to get the car home ok.I dont know if B7 327K is the Dennis Burdon car but it might be.Hope all this helps youregardsPeter Marr
Posted by John L at 11:54 PM

Fairly sure this was my mates Mk7, which he purchased in the late 80's with a Lotus twin cam fitted, purportedly from Alan Moffat's Lotus Cortina, small bonnet hole was from the twin cam era, and then the red motor triple carbs demanded the long hole.