Memories of B8/3 began flowing a few months ago when Ross McConnell dragged out a few photos of it from 1970, taken at the Bolwell factory, such as it was back then. 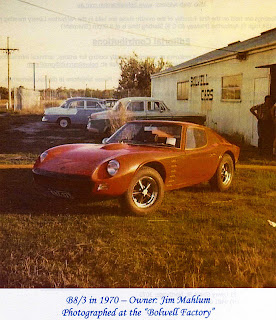 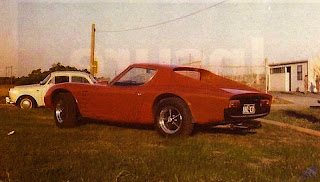 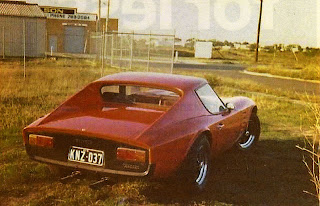 Here it is with its fixed side windows and sporting the pre-Bolwell Nagari wheels.
When B8/5 arrived in Adelaide soon after this, it too had the fixed windows but had the Bolwell mags (the rather heavy first version of course).
Pete published the photos in Slipstream and added the amount of history that most of us know. 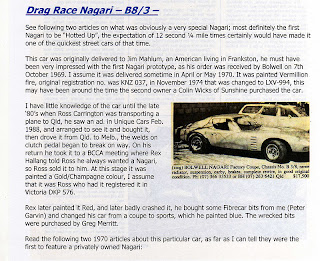 There are a few gaps that maybe a reader could fill, like how did it get to Queensland. I remember Ray Moore and Peter Cowen, both Brisbane Nagari owners back then, talking about an elusive red Nagari that nobody ever got close enough to identify.
Pete also published these two write-ups. 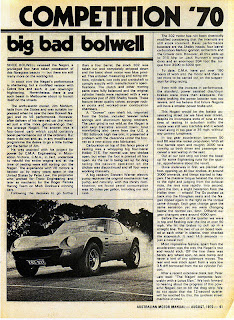 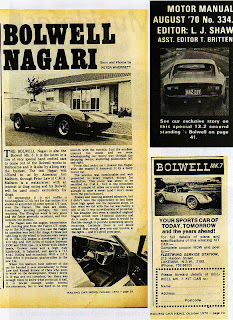 Then Colin presented this picture of Dennis Walford's bucket running against a Nagari, presumably B8/3. 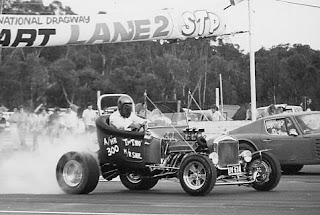 I've been scanning Calder Dragway entries and results the other day and discovered this snippet.
Calder Dragway 3.5.70 P. Law, Bolwell Nagari  16.43 secs.  87.63 mph.
P. Law is Peter Law from CMA Engineering who built the drag engine for the car. The times tell us that this was pre the big motor which would have to be the case as the car was only delivered literally days before the event.
Posted by John L at 7:53 PM